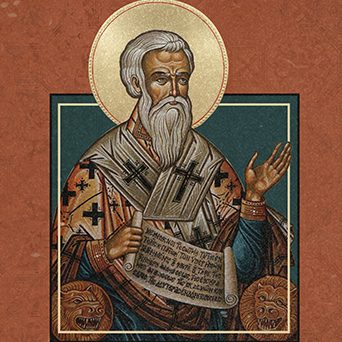 Also known as Theophorus: meaning baring the name of God.

Ignatius was a disciple under John the Revelator. It is said that Ignatius was the little child whom the Lord placed in the midst of His apostles (Mat. 18:2) indicating he was not a converted Christian but brought up in Christianity. As to the personal history of Ignatius, almost nothing is known. The principal source of information regarding him is found in the account of his martyrdom
Ignatius writings were Gnosticism and taught in the Church of Antioch. There are fifteen Epistles which bare the name of Ignatius, to name a few were to the Philippians, Smyrnaeans, Ephesians, Polycarp, Romans, Philadelphians and Antioch. He was a man in all respects of an apostolic character. He escaped many persecutions by helm of prayer and fasting, by earnestness of his teachings, and spiritual labor. After presenting himself voluntarily before Emperor Trajan at Antioch and declaring his allegiance to Christ, Ignatius was condemned to die in Rome. He inwardly
reflected, that his confession which is made by martyrdom, would bring him into a yet more intimate relation to the Lord. On his journey from Antioch to Rome, he was allowed to stop and visit Christians, and he wrote seven letters which have survived to this day. In these letters, he warned the churches about heresies that threatened their peace and unity and addressed points of ecclesiastical order that give us a glimpse of how the early church functioned. Like a divine lamp, he enlightening every one’s understanding by his expositions of the Holy Scriptures. Polycarp, Irenaeus, and Origen all refer to him or his Epistles in their writings, confirming what is known of his life