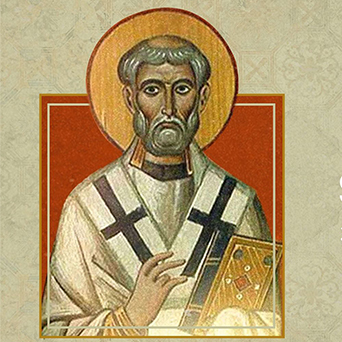 Also known as Clement of Rome or Bishop of Rome

He was the disciple of St. Peter, and a friend of St. Paul. St. Clement was a Gentile and a Roman, he was considered the first Apostolic Father. St. Clement was in Philippi with St. Paul (A.D. 57) when that first-born of the Western churches was going through great trials of faith. Little is known of his life; the main source of information is in his Epistle to the Corinthians the earliest piece of Christian literature other than New Testament writings. The high esteem in which Clement was held is evident from the fact that until the 4th century his letter was accepted by some as Scriptur

Clement intervened in the name of the church at Rome and appealed for restoration of peace, harmony, and order. The document, which demonstrates Clement’s familiarity with Greek Stoic philosophy and
mythology, gives a valuable picture of early church organization, belief, and practice. As a co-presbyter (elder of the Church) with Linus and Cletus, he succeeded them in the government of the Roman Church after both perished in a fiery trial, and Clement became immediate successor to their work.
St. Clement’s Epistle was written near the close of his life, and not just after the persecution of Nero. Apparently the church in Corinth had moved to replace their acting leadership and Clement is writing to instruct them concerning apostolic succession. He uses the Old Testament example of Moses, showing that God appoints leaders as He did with the priesthood and those leaders appoint the next generation. New Testament contains two writings described as the Epistles of one Clement. The general opinion is, that he is the same as the person of that name referred to by St. Paul (Phi_4:3). St. Clements Epistle has been publicly read in very many churches both in old times, and also in our own day. The high tone of evangelical truth which permeates, the simple and serious heart and conscience, shows to promote the best interests of the Church of Christ, and still impart an undying charm to this precious relic of later apostolic times.