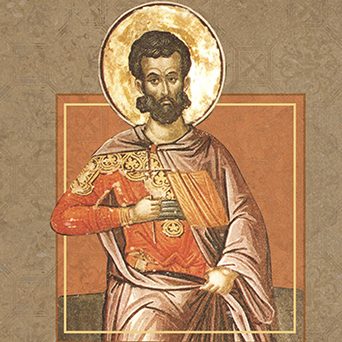 Tatian was educated in Greek philosophy.  As a young man he travelled extensively. Disgusted with the greed of the pagan philosophers with whom he came in contact, he conceived a profound contempt for their teachings. He had been initiated into the Eleusinian mysteries (the most famous of the secret religious rites of ancient Greece) and experimented of every kind of religious worship. Repelled by the grossness and immorality of the pagans, he withdrew to seek the truth. He came across certain Christian writings that were older in point of antiquity than the doctrines of the Greeks and became attracted by the holiness of the Christian religion, the sublimity and simplicity of the Scriptures, the noble explanation of creation, its prophecies, and the excellence of the precepts.  He declared that his soul was taught by God and he understood how the writings of the Gentiles lead to condemnation, but the sacred Scriptures to freedom from the world’s slavery. He believed Scriptures liberated us from thousands of tyrants and giving us, not what we had not received, but what we had once received but had lost through error. He declared that all human opinion is to be rejected and that we obey the commandments of God and follow the law of the Father of immorality. Tatian eventually became a convert, probably about 150 AD. He became a pupil of the 2nd-century Roman theologian Justin Martyr and joined the Christian community in Rome, where he was a “hearer” of Justin Martyr.

Tatian’s Christian life, like that of Tertullian, divides into pre-heretical and heretical periods.  So long as Justin was alive, says Iranaeus, he brought out no blasphemy, but after his death it was different.  He worked and taught at Rome for some time after Justin’s death, dealing with what was hidden and obscure in the sacred writings (i.e. of the Old Testament).  After the death of Justin, Tatian unfortunately fell under the influence of the Gnostic heresy, and founded an ascetic sect, which, from the rigid principles it professed, was called that of the Encratites, that is, the self-controlled or the masters of themselves.  Tatian became first suspected and then denounced.  He left Rome, possibly pausing at Alexandria to teach, among his pupils being Clement of Alexandria and then proceeding to the East, to Mesopotamia.

Tatian wrote many works, but only two have survived. One of these, Oratio and Graecos is an apology for Christianity, containing in the first part an exposition of the Christian faith with a view to showing its superiority over Greek philosophy, and in the second part a demonstration of the high antiquity of the Christian religion. The tone of this apology is bitter and denunciatory. The author protests against Hellenism (devotion to or imitation of ancient Greek thought, customs, or styles) in all its forms and expresses the deepest contempt for Greek philosophy and Greek manners. The other extant work is the Diatesseron, a harmony of the four Gospels containing in continuous narrative the principle events in the life of the Lord. Two revisions of the Diatesseron are available: one in Latin and the other in an Arabic version.

Men honored and valued the Oratio, but say nothing of the Diatessaron.  Tatian had become unacceptable in the West, but in the Syrian-speaking East he was unknown or not followed by troublesome reflections upon his orthodoxy, and there he was able to circulate his work on the Diatessaron, which commended itself to the “simplicity” of the churches around Edessa on account of its brevity.