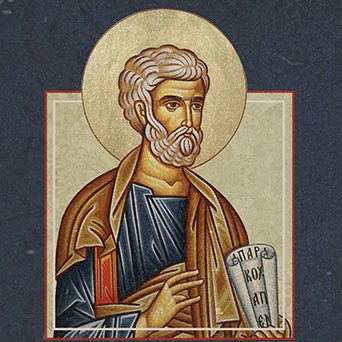 Born: date unknown, village of Bethsaida in the province of Galilee

The New Testament indicates that Peter was the son of John (or Jonah or Jona). His brother Andrew was also an apostle according to New Testament accounts. His family originally came from Bethsaida (John 1:44), but during the period of Jesus’ ministry he lived in Capernaum, at the northwest end of the Sea of Galilee, where he and his brother Andrew were in partnership as fishermen with James and John, the sons of Zebedee (Gospel According to Luke 5:10). Peter was one of twelve apostles chosen by Jesus from his first disciples. He was called to be a disciple of Jesus at the beginning of His ministry. He received from Jesus the name Cephas meaning “rock”, or in Latin Petra. Matthew continues that upon this rock—that is, upon Peter—the church will be built. The Apostle Peter may have been the most outspoken of the twelve apostles in Jesus’ ministry. He certainly became one of the boldest witnesses for the faith. His beginnings were certainly humble in origin. The life of Peter is read in the New Testament: the four Gospels, Acts, the letters of Paul, and the two letters that bear the name of Peter. He was also a follower of John the Baptist. Peter, like all humans before their calling, was a sinful man. In fact, he was ashamed of his sinfulness in the presence of Jesus Christ (Luke 5:6-8). Peter was
perhaps the very first disciple that Jesus called along with His brother Andrew. When Jesus told them (Peter and Andrew) to “follow me” they simply walked away and left everything they had without a second thought (Luke 5:9-1). Consider the fact that this meant that they left everything

The New Testament reports that Peter was unlearned in the sense that he was untrained in the Mosaic Law (Acts 4:13), and it is doubtful that he knew Greek. He apparently learned slowly and erred time and time again, but later, when entrusted with responsibility, he demonstrated that he was mature and capable. The Synoptic Gospels (Synoptic Gospels; Matthew, Mark, and Luke) largely agree in the amount of emphasis each gives to the leadership of Peter among the Twelve Apostles. Peter served as spokesman, the outstanding member of the group, and a certain precedence over the other disciples. Peter fled when Jesus was arrested but did find his way to the palace of the high priest where Jesus had been taken. When confronted in the courtyard with the danger of admitting association with Jesus, he chose to deny Him (Matthew 26:69–75; Mark 14:66–72; Luke 22:54–61; John 18:15–18, 25–27). The degree of his shame and the depth of his love were revealed when he later realized that the prophecy had been fulfilled, and he wept bitterly (Matthew 26:75; Mark 14:72). The fact of Peter’s denial did not destroy the love and trust that Jesus felt for him. It was to Peter—who had confessed the Sonship of Jesus (Matthew 16:16), who had been commissioned earlier to “lend strength” to his brothers (Luke 22:32), who had hesitated in his resolution at one crucial point and who on the morning of the Resurrection “ran to the tomb” (Luke 24:12)—that the Resurrected Christ first appeared. The earliest report of Peter’s

priority as a witness to the Resurrection is found in the letters of Paul (1 Corinthians 15:5), and this most probably is the intent of (Luke 24:34). Peter was the first one to preach on the day of Pentecost after the coming of the Holy Spirit and he was the first one to proclaim Christ to a Gentile. He was one of the boldest apostles of
all. He willingly suffered persecution, imprisonment, beatings, and even rejoiced at the fact that he was worthy to suffer disgrace for the Lord’s sake (Acts 5:41). Early church fathers like Tertullian, Origen, and Eusebius state that Peter’s martyrdom was stretched out by his hands, he was dressed in prison garb, he was taken where no one
wanted to go (a crucifixion), and was crucified. He was said to be crucified upside down because he felt unworthy to be crucified in the way that the Lord Jesus Christ had been.

From an arrogant, cocky, man of thunder, he became a humble, willing, obedient servant of the Lord even to death. He rejoiced in that day of his death, knowing that he would be reunited with his beloved Savior. This was a lifetime of 65 years – of which his last forty would be devoted to proclaiming the gospel of Jesus Christ. In the Old Testament the number 40 was always a number of testing – and tested Peter was.