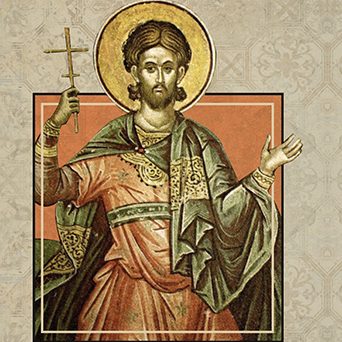 Justin Martyr was a friend of St. Irenaeus. He disciple St. Titian and St. Clement of Alexandria. Justin was a Gentile, of pagan Greek parents, born near Jacob’s well.
He was brought up with a good education and he had traveled extensively. Before his conversion to Christianity he studied in the schools of the philosophers, searching after knowledge. Justin was impressed with the extraordinary fearlessness which the Christians displayed in the presence of death, and with the glory, stability, and truth of the teachings of the Old Testament. He acted as an evangelist, taking every opportunity to proclaim the gospel as the only safe and certain philosophy, the only way to salvation. He engaged in debates and disputations with non-Christians of all varieties, pagans, Jews, and heretics. He tells the professional philosophers on a throne how false and hollow is all wisdom that is not meant for all humanity. He exposes the weakness of even Socratic philosophy; he shows in contrast the force that works in the words of Jesus. Justin settled in Rome as a Christian teacher, while he was there, the philosophers plotted against him and he sealed his testimony to the truth by martyrdom in the reign of Marcus Aurelius
The writings of Justin Martyr are among the most important that have come down to us from the second century. He was not the first that wrote an Apology in behalf of the Christians, but his Apologies are the earliest extant. They are characterized by intense Christian passion and they give us an insight into the relations existing between heathens and Christians in those days